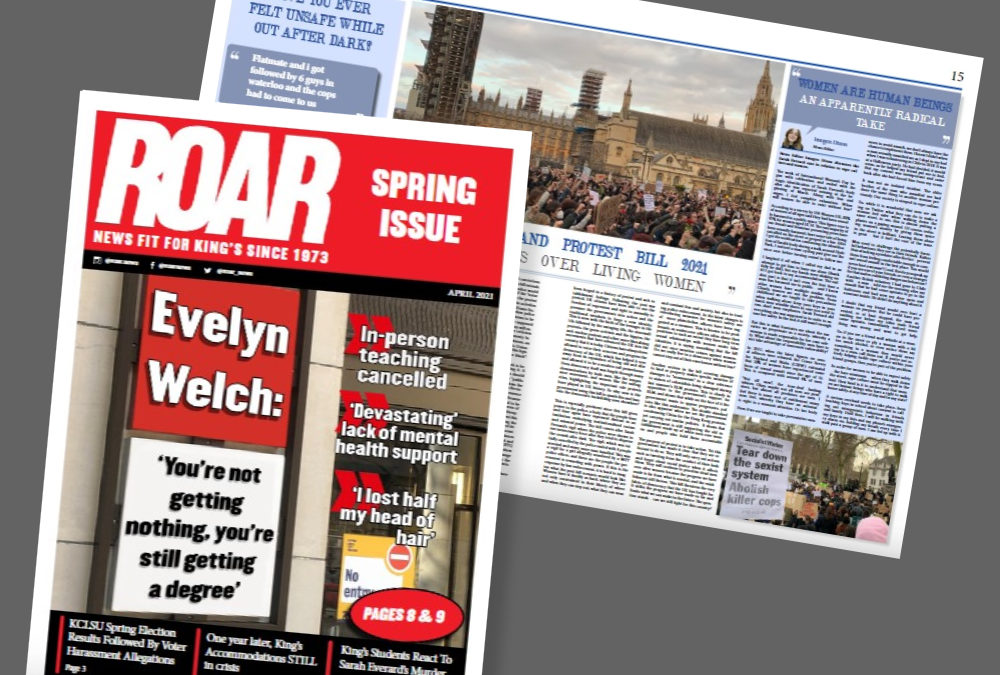 Roar newspaper is exactly what you would expect from the name: loud and proud.

King’s College London is ranked in the top 10 UK universities in the world, and their free student newspaper provides King’s students with all the most important stories, both from their campuses and the city of London itself.

Impressively, a student studying Classics with English is Roar‘s President and Editor in Chief, and here Marino Unger-Verna gives you the run-down on what they’re about:

“Our goal is to be a one-stop-shop for King’s students’ media needs. Our eye-catching graphics and colourful headlines help us capture the attention of the 30,000 students at King’s.

Roar is editorially independent from both King’s College London and our students’ union. While this does limit our ability to receive steady funding from either group, we wouldn’t have it any other way. Some of the most crucial stories we run are those which hold the organisations central to our community accountable. The ability to platform students’ personal views is at the core of what we do.”

Reach Printing Services print Roar and a large portfolio of university newspapers and freshers guides, in addition to publications for charities, councils and businesses and of course national newspapers including The Mirror and Daily Express.

What are 2021 students’ perceptions of print media?

“Having a physical tabloid to look at can make all the difference in terms of engagement, especially at a university as large as King’s. The loss of print during lockdowns and university virtual learning made it far more difficult for us to put the stories that matter in the hands of our fellow students.

While I think many of today’s students are drawn to digital and social media, I think print media still serves a vital role in the media landscape and we usually print around 2,500 copies per issue. My view is nothing really beats having a story in your hands; not only because of the added physical aspect, but because readers of print media often find stories they might never otherwise have sought out or come across.”

Roar receives a small printing budget from King’s College London Students’ Union, but is primarily funded via advertising. Having a diverse range of advertisement opportunities is key to their partnerships with businesses keen to reach KCL’s valuable student population.

They are one of the very few red-top student papers in the UK, having recently returned to a more traditional tabloid format after a brief foray into more broadsheet design aesthetics. They also now place an additional focus on showcasing other types of student-made content to news, including opinion and culture pieces, fictional writing, and multimedia content.

All team members contribute time to Roar on a voluntary basis; whether they’re writers, editors, photographers, print designers, podcasters, illustrators, or members of the administrative team, and the group seeks to make a real contribution to the community. Many of the Roar team – Marino included – are keen on pursuing careers in media.

Everyone at Reach Printing Services congratulates the Roar team for the professionalism of their newspaper and wishes them the very best in their future media careers!

From retailers to councils, estate agents to political parties, Derek works with a wide range of clients with a broad range of printing requirements. In his spare time Derek enjoys spending quality time with his three daughters, following his beloved Manchester United, and indulging in his hobby of amateur radio.

One thing you would take to a desert island